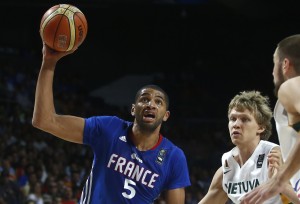 France’s Nicolas Batum drives the ball to the basket against Lithuania’s Adas Juskevicius, right, during the 3rd place final of the World Basketball between France and Lithuania at the Palacio de los Deportes stadium in Madrid, Spain, Saturday, Sept. 13, 2014. (AP Photo/Andres Kudacki)