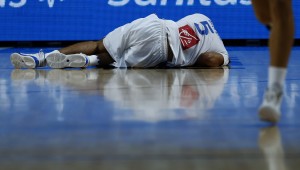 France’s Nicolas Batum lies on the floor after being injured on a drive to the basket during a basketball World Cup semifinal match between France and Serbia at the Palacio de los Deportes stadium in Madrid, Spain, Friday, Sept. 12, 2014. (AP Photo/Daniel Ochoa de Olza)