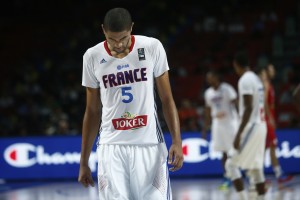 France’s Nicolas Batum walks off the court at the end of the Basketball World Cup semifinal between Serbia and France in Madrid, Spain, Friday, Sept. 12, 2014. The 2014 Basketball World Cup competition will take place in various cities in Spain from Aug. 30 through to Sept. 14. Serbia won 90-85 and will play the U.S.A. in the final on Sunday. (AP Photo/Andres Kudacki)