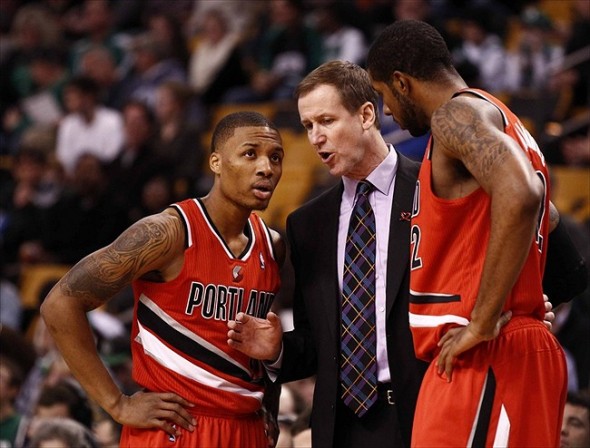 The Portland Trail Blazers announced the continuation of the “Rip City Relay,” ahead of the upcoming season.

Last year the relay went all over the state of Oregon before ending in Portland the day of the first game of the season. This year will include a Washington stop. The tour will begin on October 21st in La Grande before going to Pendleton, The Dalles, Bend, Eugene and for the first time Vancouver, Washington before ending in Portland before the season ends.

Each stop includes a “community gathering” from 4-6 PM and the Vancouver gathering will be at 2601 Falk Road.

Here’s the full release from the team:

PORTLAND, Ore. (September 4, 2014) – The Portland Trail Blazers and Moda are partnering for the second annual Rip City Relay, a week-long journey around the state of Oregon and southwest Washington that concludes at the Moda Center in time for the team’s season opener against the Oklahoma City Thunder on Oct. 29.

This year, La Grande will mark the starting line for the relay with a 9 a.m. tip-off at Birnie Park on Oct. 21. Trail Blazers personalities and Moda representatives will then engage the communities in Pendleton (Oct. 22), The Dalles (Oct. 23), Bend (Oct. 24), Eugene (Oct. 27) and Vancouver (Oct. 28) before arriving in Portland for the start of the regular season.

“We are proud to bring back the Rip City Relay to communities with some of the biggest Trail Blazers fans in the Northwest,” said Chris McGowan, President & CEO of the Trail Blazers and the Rose Quarter. “This event will build on the momentum from last year’s relay and electrifying season, as we tip off the 45th year of Trail Blazers basketball.”

An entire day of events are being scheduled in each city along the route, and everyone who participates in the festivities will be encouraged to sign a banner as a symbol of their involvement. As part of the Trail Blazers’ and Moda’s partnership to showcase healthy and active living, events will include school assemblies and basketball clinics.

The visit in each city along the route will conclude with a community gathering from 4-6 p.m. featuring activities for all ages. Bi-Mart, a supporting partner of the relay, will host the celebrations in The Dalles (3300 West 6th Street), Eugene (1680 West 18th Avenue) and Vancouver (2601 Falk Road). Moda will host the gatherings in La Grande (909 Adams Avenue) and Bend (360 SW Bond Street), while the community festivities in Pendleton will take place at Wildhorse Resort & Casino (46510 Wildhorse Boulevard).

Trailblazers.com/ripcityrelay will provide updates and information all along the relay, which will conclude with a celebration outside the Moda Center around 5 p.m. on opening night.