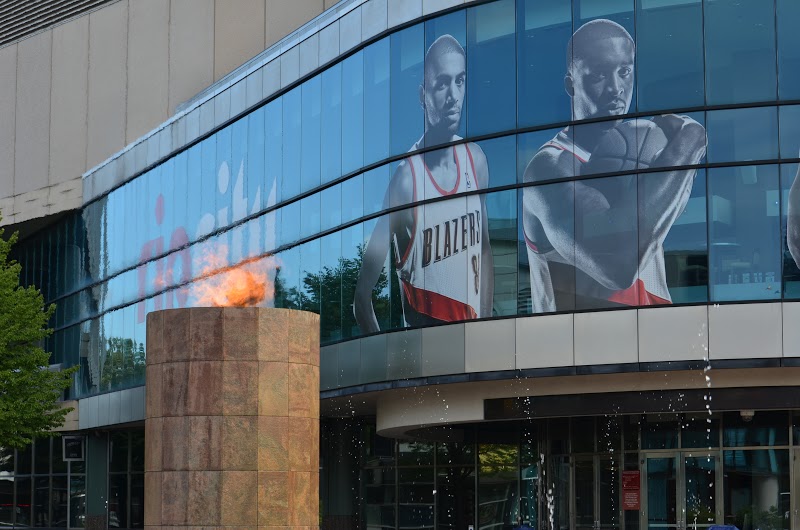 After shutting them off for 9 years, the Blazers brought back the fire at the Rose Quarter

On Wednesday morning the Portland Trail Blazers held a guided tour of the summer renovations or what they call “capital improvements.”

Blazers president and CEO Chris McGown and General Manager of Operation for the Rose Quarter, Chris Oxley were on hand to lead a guided tour of the new improvements, which they promise is just the first of many to the event space.

“Although you see a lot of stuff going on in the arena, we’re not done,” pledged McGowan. “Every year we are going to be focused on identifying projects that we can work on for our fans. We don’t know exactly what those will be but as an organization, we’re super focused on that.”

On the outside, the most noticeable aesthetic changes were seen towards the end of the regular season and start of the playoffs. In March they opened Dr. Jack’s, a full service bar offering small food items on the Rose Quarter campus, designed as a gathering spot before and after events.

As you can see in the picture above, they brought back a couple of original elements from the Rose Quarter with the fire/fountain centerpiece in front of the entrances.

But it is inside the Moda Center where the most relevant additions are being done.

“We’ve started back up on the club level. We are essentially reinventing the culinary experience in its entirety for our premium level,” said Oxley. The club level at the Moda Center will no longer be an all-you-can-eat experience. Rather, season ticket holders are given a 30-dollar cash value to their ticket which they can use on the club level, or at any vendor in the concourse.

They have added six different food locations including another a Bunk Sandwiches (the space where it will be is pictured below), an Italian themed restaurant which was identified as a need by the Blazers patrons as well as a healthy grab-n-go spot that will serve Kombucha. And here is a rendering of how the Cha! Cha! Cha! location will look inside the Club Level. Additionally, the space known as the “Crown Royal Lounge,” will have a local whiskey carrying the name: Pendleton, according to Oxley.

The Italian restaurant, which name is escaping this writer at the moment, already has their pizza oven installed as well. They will also have another in-house location where you can make your own creations like a “kimchee burger,” according to Oxley called Junction 5. They have redesigned 21 suites out of their 66 executive suites on the suite level as well. They also showed off their marketing suite to attract perspective clients called “Suite 365.” They also unveiled a new product on their suite level, called the “studio suite.” Which is a cluster of 12, four-person suites that is designed to be what the Blazers VP of Premium Seating Anthony Jones called “the most exclusive area in the entire arena.”

The area, which is expected to be finished on opening night, is designed to create what Jones called a “country club feel.”

But, back to the improvements that matter most and we have the coup de grace of the day in the 300-level bar called “The Pines.”

Panoramic View of “The Pines”

Here’s a rendering of what it should look like when finished. The Blazers produced a nice video tour of the upgrades on their website.

They expect all improvements to be finished by the start of the regular season.

That video can be seen right here.