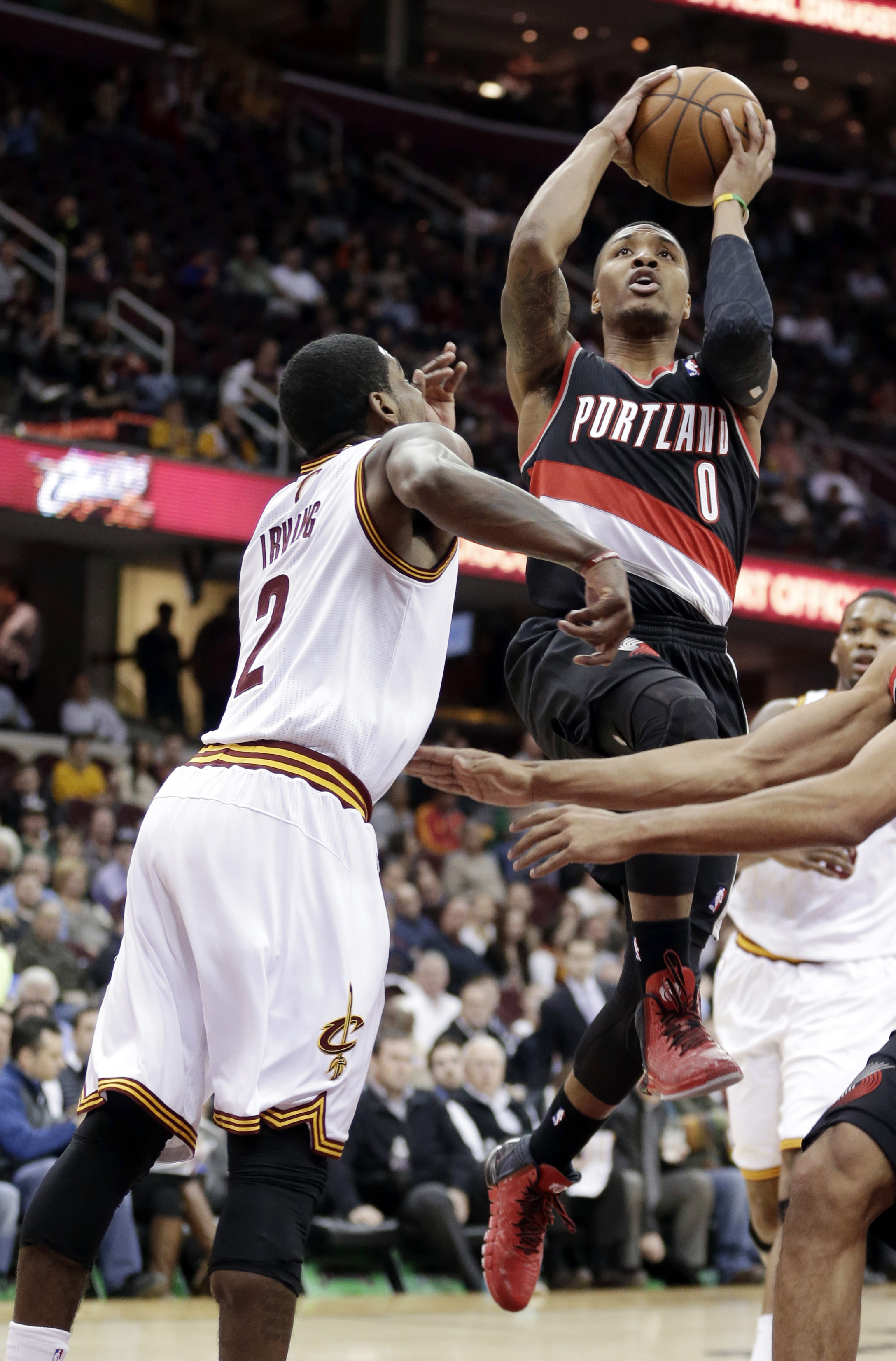 Dame and Kyrie. It’s been a lot of fun to see these two guys go at it the past few seasons, with each getting the better of the other a few times. They’re competing against each other for one of the 12 spots on the Team USA Roster, along with 17 other players.

Yesterday was the first day of training camp and we’ll discuss reports of Dame’s first day. But first we turn to Grantland’s Bill Simmons and Zach Lowe, who had a long discussion about the FIBA World Cup on the latest B.S. Report (listen below).

Zach Lowe mentions Toronto guard DeMar DeRozan (around the 24:30 mark of the podcast) and then Simmons starts talking about Washington point guard John Wall, where the discussion turns to point guards quickly. And then, the Grantland Boss makes a case for Damian Lillard to make the team over Kyrie Irving at around the 26:30 mark.

Zach Lowe: DeRozan is another guy I would be surprised if he made the team. He’s an All-Star.

Bill Simmons: I can’t see him or John Wall making it. I don’t feel like their games are correct for this level of whatever goes on in international basketball. You need to be able to…we learn this every year: you need to be a really good shooter if you’re going to be a wing guy or you have to be a phenomenal defensive player. If you’re not one of those two categories it’s not happening.

ZL: Wall is interesting because, he was the last minute invite and he wasn’t invited the last time we did this for the select team or the national team’s larger pool. It’s interesting how reluctant they are to make him one of the guys. Part of it, even on this B-team there is Lillard, Rose, Irving, Curry. So we’re flush with point guards period. But I agree with you. He’s not the shooter that those guys are. He shot well by his standards. One of the strengths the US has, is we play fast. And he’s currently the best equipped of all those guys to cause some havoc to get the turnovers. Push the ball and find shooters. I know he can’t shoot as well as some other players but I think he might fit better than maybe the Team USA higher-ups think.

BS: I thought Indiana pulled his pants down in round two and really exposed him in a lot of different ways. In fifth gear he’s great, in first, second or third gear he’s not. He just has a long way to go. I hope the the watches those games. I like John Wall. Probably other than Westbrook he’s probably the most electric athlete at the guard position. But, you got to learn how to play half court too or nothing is going to happen. I thought he really hurt them in the Indiana series.

It’s funny though, you mention Lillard. Why wouldn’t…everybody has Kyrie definitely on this team. In my opinion, A) a better fit B) he’s done more and C) he’s just better. Why isn’t he penciled in ahead of Kyrie?

ZL: After last season there’s really no good answer. They’re similar players except Lillard was sort of a more stable team force and a better three-point shooter last year, off the dribble and off the catch. More prolific and just better. And he’s a sneaky good athlete too. He’s not quite as flashy in terms of the dribbling and fancy passes as Kyrie but he may be nearly as good of an athlete.  If not a better one and more above the rim when he needs to be. I agree with you–if he’s not penciled in, clearly regarded behind Kyrie in the pecking order–I’m not sure why that is.

BS: I really hope that’s not the case and by the way, everybody on this team should be put on the premise of “we’re in Spain, who do you trust in that game?” I trust Damian Lillard, I just think that guy is fearless. I don’t trust Kyrie Irving at all, I haven’t even seen him play in a big game. I know what Damian Lillard can do in a big game. I’ve seen him have multiple big moments. If you made the All-Testicles team, he would be the point guard. What’s interesting though, we mention Rose, Curry, Damian Lillard, we mentioned Kyrie Irving, not sure you can have all four.

ZL: You could. I mean you can.

BS: Why would you though?

ZL: Well you’re playing Spain and if you’re thinking about the Spain match-up, Juan Carlos Navarro is still on the roster. He’s listed on the FIBA roster. He’s a little guy by shooting guard standards and if they are going to play a point guard in him you can play two point guards pretty easily. And against some other international team, if your wings are not satisfying you, you could go that route. But the other knock on Lillard is, at the very least, he’s not going to have Harden and Parsons playing defense against him in big moments for team USA. (Laughs from both). Making up the roster is an interesting part of the game, I’m just glad I don’t have to do it.

Chris Haynes of CSNNW.com reports that Lillard rolled an ankle during the Team USA practice on Monday but that it won’t keep him out of anything. He also reports Kevin Durant had some flattering word for Portland’s star.

“He’s a big-game player, man,” Durant told CSNNW.com in speaking of Lillard. “I can respect that. He comes to play every night. Man, at that age, in my second year in the league, I wasn’t doing the stuff he was doing. He’s a special player.”

Media was permitted to watch some scrimmaging today. Lillard rolled his left ankle during competition and finished off the rest of the session with a slight limp. The All-Star guard downplayed the ankle injury though it noticeably limited him to a certain degree.

“I’ll be alright,” Lillard said. “I just rolled it a little bit. It’s not going to keep me out of anything.”

Casey Holdahl of TrailBlazers.com reports that Lillard is embracing his role offensively alongside superstars like Kevin Durant and Derrick Rose while also competing hard on defense.

“When you’re on the court with (Kevin Durant), James Harden, Derrick Rose, I know what they can do, playing against them and watching them,” said Lillard. “So I don’t need to go out there and do all this extra stuff when I can make the game simple for myself. I know what I’m capable of. I know I can knock down shots, I can get to the rim, I can compete here. I’m here for a reason. No nerves at all. I’m just playing.”

“You’ll see guys who don’t have a reputation for playing hard defense picking up full-court,” said Lillard, possibly using himself as an example. “You’ll see guys doing stuff that basically shows you that there are going sell themselves for the greater good of the team. And that’s what it’s all about. You see the passion that they play with and that’s the difference. That’s what it takes to be able to a part of something like (USA Basketball).”

Joe Freeman of The Oregonian writes that even though Lillard had a bad shooting day, he felt like he played well and still feels good about his chances against an elite crop of point guards.

Multiple times, Lillard perfectly navigated a pick-and-roll alongside Kevin Durant, setting Durant up for an open shot or extra pass. Once Lillard tossed a beautiful bullet pass through traffic to Kyle Korver underneath the hoop and another time he breezed past Wall on the perimeter and charged toward the hoop, before missing a left-handed layup past a help defender. On defense, where Lillard’s roster consideration will be judged as harshly as anywhere, he deftly and diligently chased the speedy Wall and Irving, regularly picking them up before they crossed halfcourt.

“You want to make every shot,” Lillard said. “But I don’t think the fact that I didn’t shoot the ball well means I didn’t play well. I thought I played well. I made plays, got my hands on balls, I played good defense. I know I need to make shots — and I know I will make shots.”

Video of Lillard’s media session in Vegas from yesterday can be seen above via YouTube user portlandtrailblazers.