Business Leaders Gather In Detroit For The National Business Summit 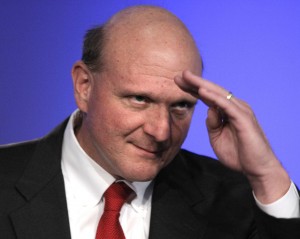 DETROIT – JUNE 17: Steve Ballmer, Chief Executive Officer of Microsoft Corporation, sits on the panel at a Technology Town Hall at the National Summit June 17, 2009 in Detroit, Michigan. The National Summit is a three-day gathering of business, labor, government and academic leaders designed to develop and promote America’s competiveness in a global economy. (Photo by Bill Pugliano/Getty Images)