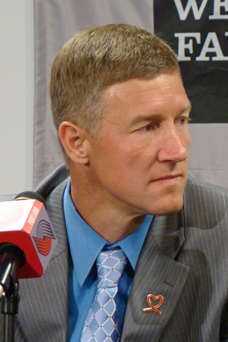 Chris Haynes of CSNNW.com reported via twitter that the Blazers and their Director of NBA Scouting Mike Born have parted ways as of Friday. The team decided not to pick up his option year on the contract.

Born, 48, was brought on to the Blazers staff as a domestic scout and then promoted as the Director of NBA Scouting in 2007 by then General Manager Kevin Pritchard.

Ben Golliver has a more detailed breakdown of Born’s role with the basketball operations team and how he got there over at Blazersedge.

It’s uncertain what effect this will have on the organization and where Blazers GM Neil Olshey will go to fill the void.

Thankfully for him, he has a lot of time to fill the position.