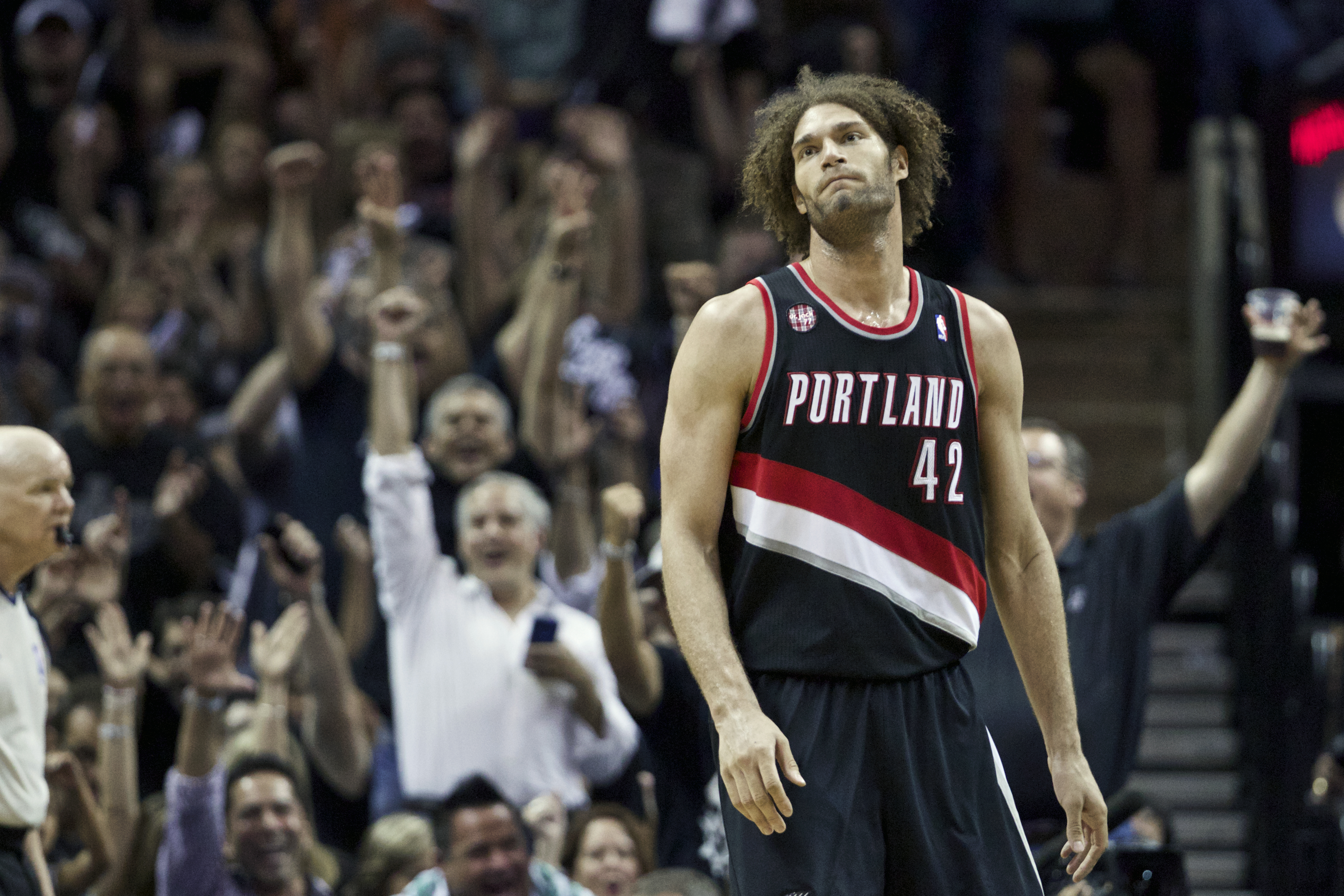 That look on Robin Lopez’s face probably says it all.

After Game 1 the Blazers had the excuses.

They hadn’t been in the second round before, it was new territory and a new level of intensity against the defending Western Conference champs.

After Game 2 the Blazers know they can’t pull the “we weren’t ready” card.

They started off the game aggressively and they played with precision, taking an early lead. However, the Spurs laid the wood to them in the second quarter when they scored 41 points which helped propel them towards a 17-point victory.

The Spurs have been fantastic on both ends of the court and they’ve exploited almost any possible lapses by the Blazers on either end of the court. Then, of course, there is the fact that they are also doing everything better.

For instance, look at Tim Duncan shake off two Blazers here for an offensive rebound. This play above is off a free-throw! The Spurs end up with the ball after the possession and even though the Spurs didn’t score the Blazers can’t afford to completely whiff when they have numbers like this.

Here’s another example of a numbers advantage where they don’t even box anyone out.

This is off a Ginobili floater miss

Not a single Blazer of the five that are in the paint gets a body on the only Spurs player in the paint and Ginobili is able to tip it out to earn an extra possession for the Spurs.

The problem, as Terry Stotts told reporters on Friday afternoon, isn’t just the offensive rebound. The Spurs have averaged 1.75 points per possession on second chances which is indeed an off the charts amount. But it’s either a reflection of something the Spurs saw in Portland’s technique that’s seen them attack it harder or they’ve simply been getting more bounces than before.

The Spurs have been very averse to hitting the offensive glass in recent seasons but Popovich has been known to tailor game plans towards opponents and things like that or attacks at the rim by Ginobili like this could be examples of a more aggressive gameplan to get extra possessions. The rebounds aren’t the only problem, but the Blazers have to clean things up on the defensive glass. The Spurs are feasting off of these opportunities at a rate that likely can’t continue.

However, would you really want to test the Spurs?

It’s only two games and things in a playoff series can turn around rapidly after one game and you also don’t want to overreact. Something that the Blazers can have more control over is their transition defense and how they need to be ready against the Spurs transition actions.

The Rockets just ran straight to the rim. The Spurs don’t waste chances like that.

Here’s Tony Parker with the ball in transition with Wesley Matthews on him. But of course Parker is just setting him up so his pal Duncan can lay him with one of those screens Lillard speaks of.

Duncan did this a few times for Parker and Splitter is a great screener too. Boris Diaw is also a major threat to screen in transition and the Blazers have got to be aware of these types of actions before they come. That, or a better way to deal with them when they realize they are coming.

The Spurs have sniffed out the Blazers pet plays all series but Portland has to try to make the Spurs even feel uncomfortable.

Maybe they need to put a pet in the visitors locker room at the Moda Center.

Whether it’s that, or defense, they need to give the Spurs a taste of their own medicine or defending West champs will have their eyes on a sweep.