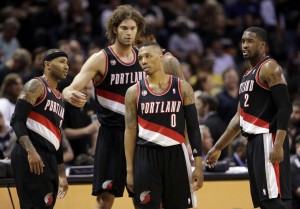 Portland Trail Blazers’ Damian Lillard (0) and teammates wait to enter the game following a timeout during the first half of Game 1 of a Western Conference semifinal NBA basketball playoff series against the San Antonio Spurs, Tuesday, May 6, 2014, in San Antonio. (AP Photo/Eric Gay)