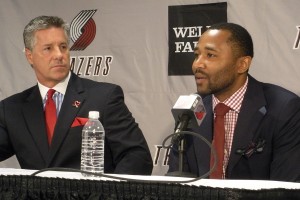 Portland Trail Blazers guard Mo Williams, right, addresses the media after he was introduced as the newest member of the NBA basketball team by general manager Neil Olshey during an news conference on Thursday, Aug. 8, 2013, in Portland, Ore. Williams, a free agent, signed a two-year contract with the club. (AP Photo/Anne M. Peterson)