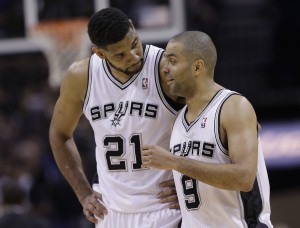 San Antonio Spurs’ Tim Duncan (21) and Tony Parker (9) walk of the court during the second half of Game 7 of the opening-round NBA basketball playoff series against the Dallas Mavericks, Sunday, May 4, 2014, in San Antonio. San Antonio won 119-96. (AP Photo/Eric Gay)