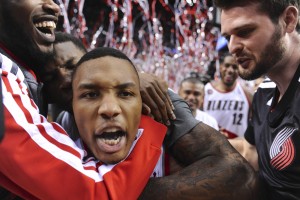 Portland Trail Blazers’ Damian Lillard, center, celebrates his winning shot against the Houston Rockets during the last .9 of a second of game six of an NBA basketball first-round playoff series game in Portland, Ore., Friday May 2, 2014. The Trail Blazers won the series in a 99-98 win. (AP Photo/Greg Wahl-Stephens)