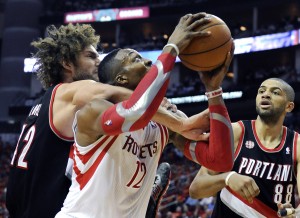 Houston Rockets’ Dwight Howard (12) is grabbed around the neck by Portland Trail Blazers’ Robin Lopez (42) as Nicolas Batum (88) stands near in the second half of Game 5 of an opening-round NBA basketball playoff series Wednesday, April 30, 2014, in Houston. Lopez was charged with a flagrant-1 foul for the move. The Rockets won 108-98 to send the teams back to Portland for Game 6. (AP Photo/Pat Sullivan)