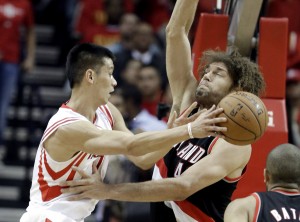 Houston Rockets’ Jeremy Lin, left, tries to pass the ball around Robin Lopez in the first half of Game 5 of an opening-round NBA basketball playoff series Wednesday, April 30, 2014, in Houston. (AP Photo/Pat Sullivan)