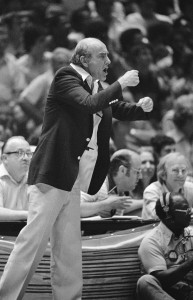 FILE – In this May 22, 1977, file photo, Portland Trail Blazers head coach Jack Ramsay signals to his team late in an NBA basketball game against the 76ers in Philadelphia. Ramsay, a Hall of Fame coach who led the Portland Trail Blazers to the 1977 NBA championship before he became one of the league’s most respected broadcasters, has died following a long battle with cancer. He was 89. (AP Photo/File)