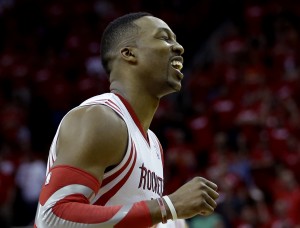 Houston Rockets’ Dwight Howard reacts after missing a free throw during overtime in Game 1 of an opening-round NBA basketball playoff series against the Portland Trail Blazers Sunday, April 20, 2014, in Houston. The Trail Blazers won 122-120 in overtime. Howard made was 9-for-17 in free throws. (AP Photo/David J. Phillip)