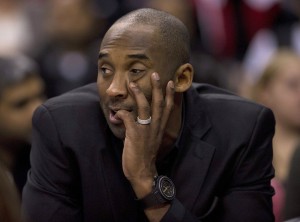 FILE – In this Jan. 19, 2014 file photo, Los Angeles Lakers’ Kobe Bryant watches from the sideline during first-half NBA basketball game action against the Toronto Raptors in Toronto. Bryant won’t be back on the court for the Lakers this season. The Lakers said Bryant was examined by team physician Dr. Steve Lombardo, who determined that the left knee injury that has kept Bryant out of the lineup still hasn’t healed. (AP Photo/The Canadian Press, Frank Gunn, File)