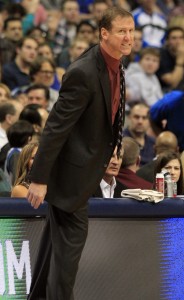 Portland Trail Blazers head coach Terry Stotts reacts to a call during the second half of an NBA basketball game against the Dallas Mavericks, Friday, March 7, 2014, in Dallas. The Mavericks won 103-98. (AP Photo/John F. Rhodes)