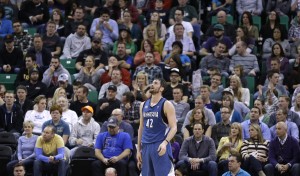 Minnesota Timberwolves’ Kevin Love (42) looks up at the board in the second half of an NBA basketball game against the Utah Jazz Saturday Feb. 22, 2014, in Salt Lake City. (AP Photo/Rick Bowmer)