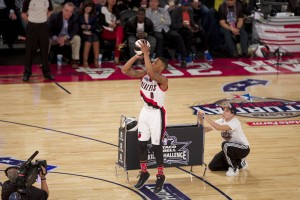 Portland Trail Blazers point guard Damian Lillard (0) participates in the skills competition at the NBA All Star basketball game on Saturday, Feb. 15, 2014, in New Orleans. (AP Photo/The Oregonian, Bruce Ely) MAGAZINES OUT; TV OUT; LOCAL TV OUT; LOCAL INTERNET OUT; THE MERCURY OUT; WILLAMETTE WEEK OUT; PAMPLIN MEDIA GROUP OUT