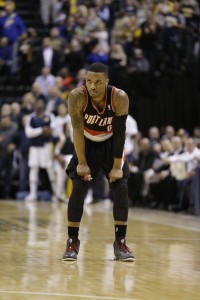 Portland Trail Blazers guard Damian Lillard in the second half of an NBA basketball game against the Indiana Pacers in Indianapolis, Friday, Feb. 7, 2014. The Pacers defeated the Trail Blazers 118-113 in overtime. (AP Photo/Michael Conroy)