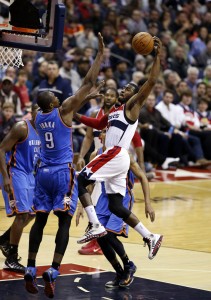 Washington Wizards guard John Wall (2) tries to shoot over Oklahoma City Thunder forward Serge Ibaka (9), from Congo, in the second half of an NBA basketball game, Saturday, Feb. 1, 2014, in Washington. Wall was fouled on the play, and had 17 points. The Wizards won 96-81. (AP Photo/Alex Brandon)