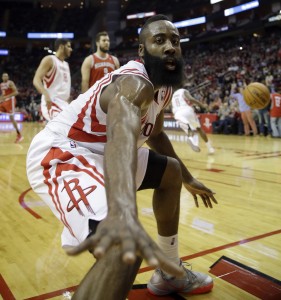 Houston Rockets’ James Harden strikes a pose after dunking the ball against the Milwaukee Bucks during the third quarter of an NBA basketball game Saturday, Jan. 18, 2014, in Houston. The Rockets won114-104. (AP Photo/David J. Phillip)