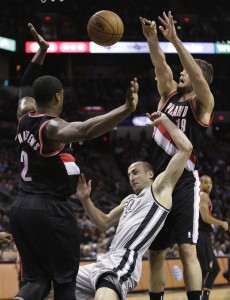 San Antonio Spurs’ Manu Ginobili (20), of Argentina, is fouled as he drives between Portland Trail Blazers’ Wesley Matthews (2) and Joel Freeland, right, during the first half on an NBA basketball game, Friday, Jan. 17, 2014, in San Antonio. (AP Photo/Eric Gay)