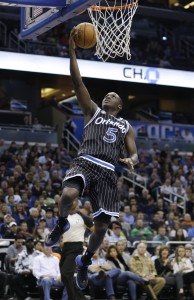 Orlando Magic’s Victor Oladipo makes an uncontested shot against the Miami Heat during the second half of an NBA basketball game in Orlando, Fla., Saturday, Jan. 4, 2014. Miami won the game 110-94.(AP Photo/John Raoux)