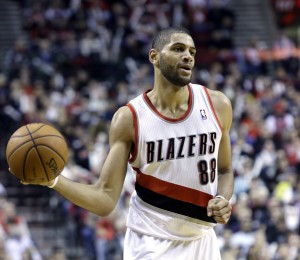 Portland Trail Blazers forward Nicolas Batum, from France, is shown during the second half of an NBA basketball game against the Charlotte Bobcats in Portland, Ore., Thursday, Jan. 2, 2014. (AP Photo/Don Ryan)