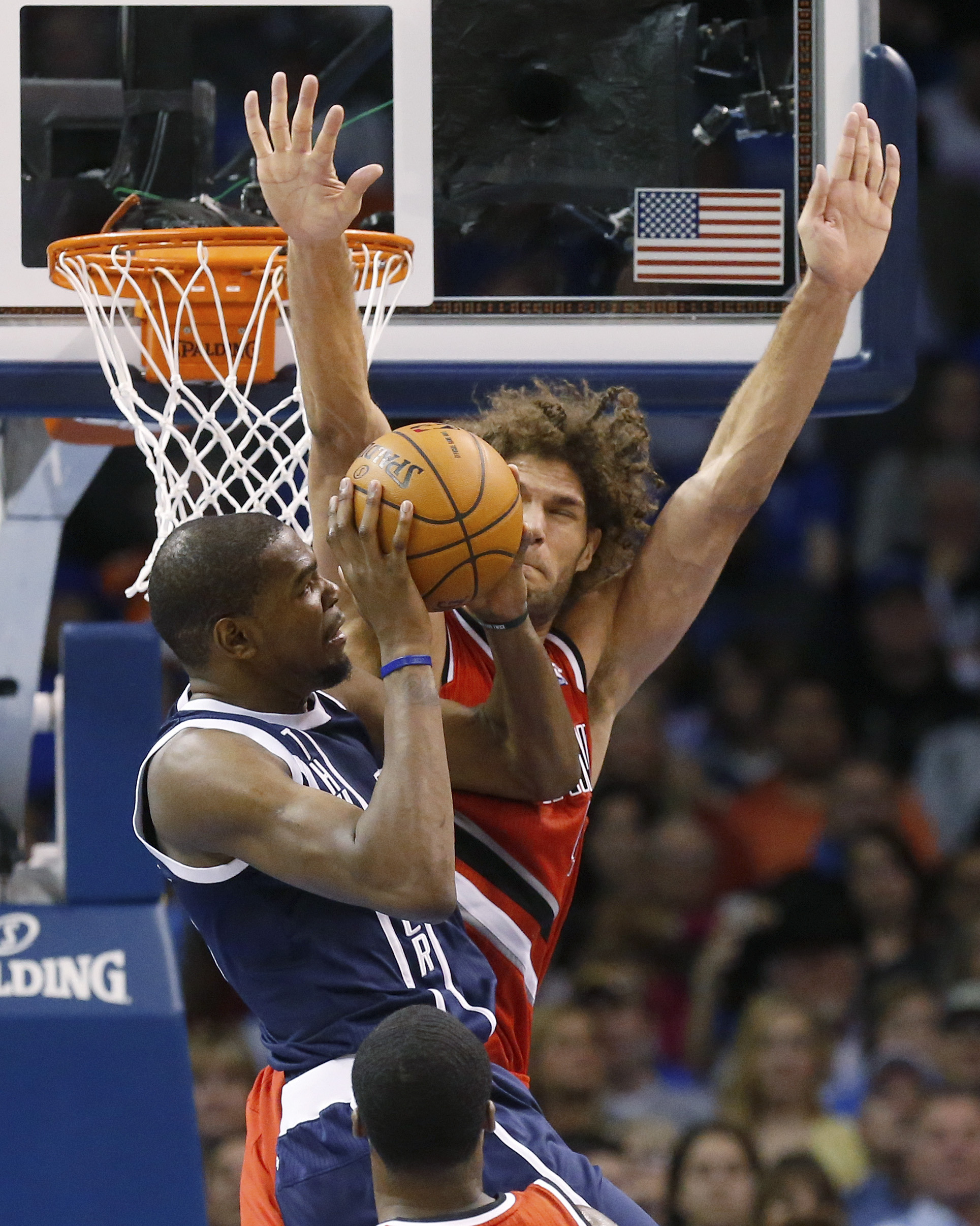 Last night, the Blazers were destroyed defensively. They allowed an egregious amount of shots at the rim and it made their offensive heroics late in the game a moot point.

For three quarters, Kevin Durant put on a clinic.

However, the Blazers didn’t let their 2013 that’s seen them on an upswing end with three-straight losses winning in Oklahoma City 98-94 after trailing by as much as 16.

While the Blazers have been better defensively in the second half of games and in the final minutes of close games, tonight has to go down as their best collective defensive performance yet.

Nicolas Batum appeared to be frustrated for three quarters as he was 0-for-6 from three-point range and was getting torched by Durant to the tune of 36 points in three quarters.

After the fourth quarter, Batum and the Blazers were the ones heading into the New Year winners.

Portland didn’t play particularly well offensively but started to show signs of life in the third quarter on that end. Still, as had been the problem against New Orleans and Miami, they couldn’t get any stops when they needed them.

For nine games in a row, the Blazers allowed their opponents to score over 100 points and it appeared that the Thunder would be on their way to that once again. But the Blazers played a collectively great fourth quarter on the defensive end and Durant went cold in the 4th, missing his last 5 shots.

The Thunder continued the trend of throwing double-teams at Damian Lillard to get the ball out of his hands and he handled the Thunder’s defense very well. Lillard didn’t shoot very well from the field overall but was 4-of-10  on three-pointers and had 11 assists while only contributing two turnovers to Portland’s season low total of six.

LaMarcus Aldridge was a stud with 25 points and 14 rebounds but from my view, the Blazers resuscitation started with Nicolas Batum.

Batum’s defense on Durant was noticeably more physical in the fourth quarter as he was holding him off the ball and now allowing him to get clean catches as he had been most of the game.

Batum was being such a pest on Durant that Reggie Jackson wasn’t able to get him the ball in the game’s closing moments.

Batum scored 15 points on the night but seven of them came in the 4th quarter, including his only three-pointer of the game. Wesley Matthews also made some timely free-throws with under 10 seconds left after Robin Lopez and LaMarcus Aldridge came together to get an offensive rebound after Mo Williams missed a pair of free-throws.

Terry Stotts had a couple of out-of-the-ordinary coaching moves that worked extremely well. Stotts is never one afraid to go outside the box and with his team needing a win in a tough environment, he shook things up a bit.

First, he went with a rarely seen frontcourt (14 minutes in 5 games this season) of Robin Lopez and Joel Freeland to start the fourth quarter. The Blazers didn’t close the gap with them in there, but they were able to stay within striking distance.

He also decided to foul Kevin Durant rather than let the Thunder have a chance to shoot a three to tie the game with 8 seconds left and Durant uncharacteristically missed one of the free-throws.

Altogether, the Thunder went 4-of-20 in the fourth quarter. The Blazers, as they have before, did it together. But, as they’ve been unable to do in the last few games, they were able to win with defense and survive a rough shooting night.

Facing a third-straight loss with this game coming on the second night of a back-to-back on the road against a team that had only lost once at home up until tonight would have been a death sentence for the Blazer teams of the past.

At the end of 2013, these Blazers reminded us once again that they aren’t the Blazers teams of the past.

The Blazers head into 2014 a 1/2 game back of Oklahoma City for first place in the West and the Northwest Division and have now assured themselves a split of the season series against the Thunder.

Was tonight your win of the year, Blazers fans?