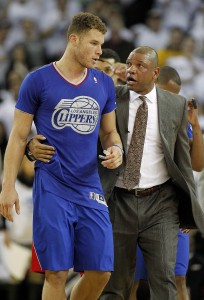 Los Angeles Clippers head coach Doc Rivers, right, walks forward Blake Griffin, left, off the court after he was ejected for his second technical foul against the Golden State Warriors during the second half in a NBA basketball game, Wednesday, Dec. 25, 2013, in Oakland, Calif. Warriors won 105-103.(AP Photo/Tony Avelar)