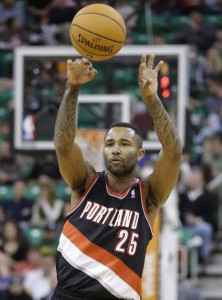 Portland Trail Blazers’ Mo Williams (25) passes the ball in the second half during an NBA basketball game against the Utah Jazz Monday, Dec. 9, 2013, in Salt Lake City. (AP Photo/Rick Bowmer)