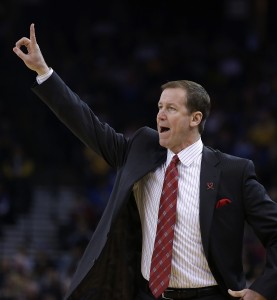 Portland Trail Blazers coach Terry Stotts gestures on the sideline during the first half of an NBA basketball game against the Golden State Warriors Saturday, Nov. 23, 2013, in Oakland, Calif. (AP Photo/Ben Margot)