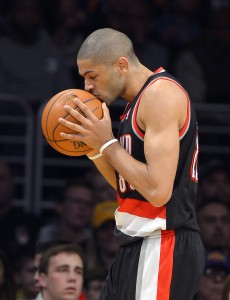 Portland Trail Blazers forward Nicolas Batum, of France, kisses the ball after being called for a foul during the first half of an NBA basketball game against the Los Angeles Lakers, Sunday, Dec. 1, 2013, in Los Angeles. (AP Photo/Mark J. Terrill)