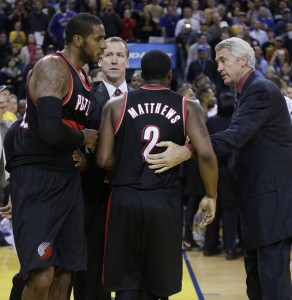 Portland Trail Blazers’ LaMarcus Aldridge, left, and Wesley Matthews (2) are pushed away from an altercation with the Golden State Warriors by coach Terry Stotts, second from left, during the second half of an NBA basketball game Saturday, Nov. 23, 2013, in Oakland, Calif. (AP Photo/Ben Margot)