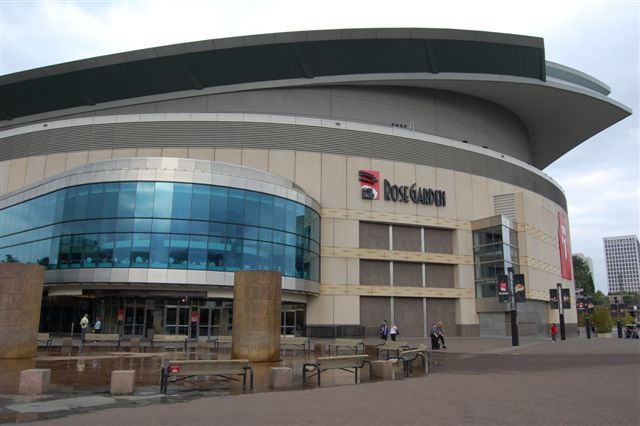 The Rose Garden, named by owner Paul Allen, opened in 1995.

After sharing the spotlight with Brian Grant on Thursday morning inside the Rose Garden’s media room, Portland Trail Blazers team president Chris McGowan revealed that the list of potential sponsors for the arena’s naming rights has been narrowed down to three companies.

McGowan, who was on hand to announce Grant’s 4th annual Shake It Till We Make It fundraising gala, said the Blazers continue to hold talks with the three companies and that he’s “hopeful” to reach a deal before the start of the 2013-2014 season. Though McGowan did not disclose the names, he described the finalists as a mix of regional and national companies.

“Nothing’s close, nothing’s imminent. We’re having good conversations about the opportunity,” McGowan said. “I’ll be consistent with what I said from day one, it’s our goal to have a deal in place before the start of the season. I’m hopeful that we’ll be able to accomplish that goal.”

Since McGowan joined the Blazers nearly a year ago, the naming rights issue has periodically captured headlines through the months. With the assistance of Premiere Partnerships in the sales process, the Blazers have communicated with approximately 250 companies. Recently, a report stated that Moda Health had purchased the naming rights but the team denied that there was a sale.

“I don’t know where the rumors came from,” McGowan said.

Good news for Blazers season-ticket holders: the team prioritizes your needs. And not-so-good news for anyone looking for a cheap discount to see the Charlotte Bobcats.

Also on Thursday, McGowan commented on the progress of season-ticket sales – which he described as trending better than last season – and said the focus moving ahead will be on preserving the holders’ benefits.

“We’re going to sell tickets a little bit differently than we have in the past, so it’s not a re-training but as an organization we may have gotten a little too dependent on some discounting and some stuff like that. We’re still going to do discount promotions but I want to preserve our season-ticket holder value a lot more,” McGowan said. “We’re going to have plenty of real sellouts next season and we’re going to sell more tickets than we did last year. And that’s what it’s all about as you’re building a team (and)  just growing revenue across the company but doing it the right way.”

Gone are the days when the Blazers discounted single-game tickets to fill the house for lesser-demand games.

“We’re just not going to do that anymore,” McGowan said.

Instead, the regulars will get the best deals.

“Season-ticket holders get a discount and we want to be very conscious about them having the best discount,” McGowan said. “It’s all going to be about preserving and protecting our season-ticket holders and providing good opportunities to come to our games just not maybe the mass discounting that you’ve seen in the past.”