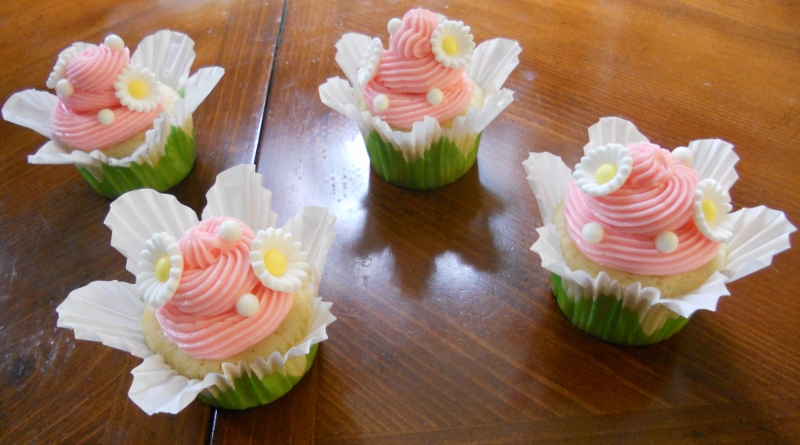 I don’t know about you, but I had been counting down the days since last year until the release of the new Great Gatsby movie. I read the novel by F. Scott Fitzgerald about a year and a half ago and was instantly captivated by the whimsical, elegant description of 1920’s New York, seen through the eyes of the rich and the beautiful. When the days had slowly counted down and the movie was finally here, I was in a theater seat watching my favorite novel play out in 3D at the first chance I got. And I must say I was very impressed. The actors were chosen perfectly and the makers of the film managed to follow the story line of the novel almost exactly. It wasn’t long after I saw the film that the idea bloomed in my head to create a cupcake designed after the book’s leading lady herself, Daisy Buchanan. The “golden girl” herself

The first part of the creative process was deciding on the cake. Immediately jumping to mind were the lemon cakes that Jay Gatsby and Daisy ate while they were having tea at Nick’s house. Thus, a lemon cake base; easy enough. Now, I figured, what’s the one thing that will truly give this cake the Daisy B. touch? After flipping back through the book, I remembered Daisy saying that her favorite thing to drink on a hot day was a mint julep. Bingo! It all fell into place. A lemon cupcake with a mint julep cream filling and a pink vanilla buttercream frosting on top. However, the true icing on the cake (no pun intended) lies in the decorations I was able to find for them at Michael’s Arts and Crafts Store: daisy cupcake liners, candy daisies, and candy pearls (representing her $300,000 pearl necklace). All things considered, you’d never be able to attribute this cupcake creation to anyone else. Exactly the plan! As satisfying as the movie was to me, that’s how satisfying these cupcakes are to the palate. The cake is incredibly moist and punchy with all that lemon flavor, while the mint julep filling hits you in a different way with a subtle spike of bourbon, which leaves you with an after-taste similar to that of root beer. So, not only are these cupcakes crazy-fun to look at, but they are also crazy-full of flavor and I’m sure I will be making them again when the movie’s released on DVD! “Daisy began to sing with the music in a husky, rhythmic whisper, bringing out a meaning in each word that it had never had before and would never have again. When the melody rose, her voice broke up sweetly, following it, in a way contralto voices have, and each change tipped out a little of her warm human magic upon the air.” – The Great Gatsby

Zest of 3 small or 2 large lemons

Juice of 3 small or 2 large lemons

Preheat the oven to 350 degrees F. Fill a muffin pan with paper liners.

1.         In the bowl of a stand mixer fitted with the paddle attachment, cream together the granulated sugar and butter until light and fluffy. Beat in the eggs one at a time. Add the lemon zest and juice and mix until combined. The mixture should look curdled so don’t worry.

2.         In a separate bowl, combine the flour, baking powder, baking soda and salt. Alternately add the sour cream and flour mixture to the standing mixer, beginning and ending with the dry ingredients. Beat well between each addition. Scrape down the sides of the bowl and mix once more.

3.         Fill the cupcake liners two-thirds full. Bake the cupcakes for 25-30 minutes or until a toothpick inserted comes out clean. Let cool for 10 minutes before turning out onto a wire rack.

1.         Place the bourbon whiskey and mint leaves in a small bowl or cup. Using the handle of a   wooden spoon, mash the mint leaves in the bourbon until the leaves become limp and a little torn. Let sit for ten minutes so the flavors can properly develop.

2.         Meanwhile, in a medium bowl, whisk the cornstarch in 1/4 cup of heavy cream. In a medium saucepan, combine the remaining heavy cream and sugar. Strain the 1/2 cup mint/bourbon mixture into the sugar and heavy cream; mix well. Bring to a boil then remove from heat.

3.         Beat the whole egg and egg yolks into the cornstarch/heavy cream mixture. Pour 1/2 of the boiling bourbon mixture into the egg mixture, whisking constantly so the eggs do not cook. Return the remaining bourbon/heavy cream mixture to a boil. Pour in the hot egg mixture in a stream, whisking constantly until the mixture thickens. Remove from heat and stir in the butter and vanilla. Let cool.

4.         When the cream is just barely warm, cut a divot into the top of each cupcake and fill with the cream. Trim the cut-out cake pieces flat to make a “lid” and place on top of the filled divot.

1.         In the bowl of a standing mixer fitted with the whisk attachment, combine butter and confectioners’ sugar. Mix on low speed until well blended and then increase speed to medium and beat for another 2 minutes.

2.         Mix in vanilla and add cream one tablespoon at a time until reaching desired consistency. Gradually add food coloring and mix until the color is even.

3.         Transfer the buttercream to a piping bag fitted with a large star tip. Frost the top of each cupcake and adorn with candy daisies and pearls.