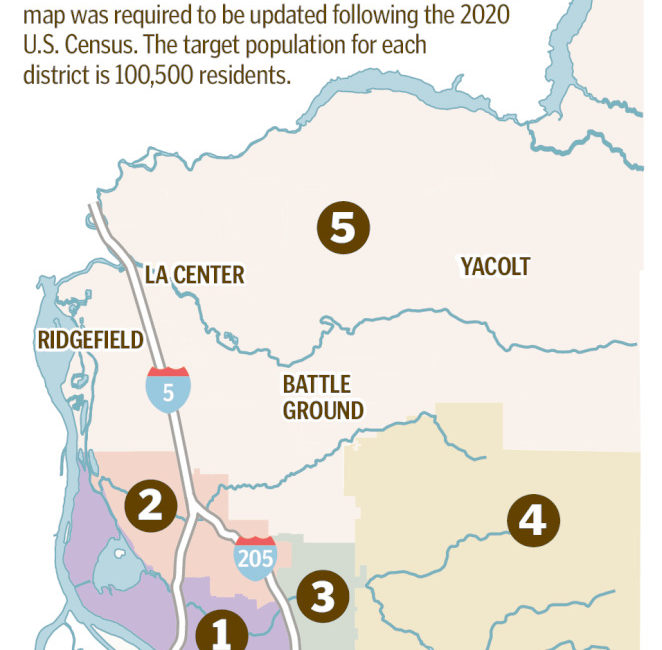 Inch by inch, step by step, the Clark County Redistricting Committee gets ever closer to finalizing a new voting district map to send to the county council for approval.
A handful of area residents voiced their support for the new map during the committee’s Feb. 7 public hearing (at just over 20 minutes long, perhaps one of the shortest public hearings on record in Clark County).
County Auditor Greg Kimsey, who chairs the committee, said the county received a dozen written comments ahead of the hearing. Nine of the comments were in support of the map, one expressed concerns about the map’s effect on a county councilor, one had a position that was unclear and the last was opposed to electing county councilors by district.
Of the seven individuals providing public comment, all spoke in support of the proposed map.
“The League encourages you to move forward with submitting the map named ‘B2’ to the county council for adoption. We believe this map most closely aligns with the map considered by the voters in the November 2021 general election,” said Nancy Halvorson on behalf of the League of Women Voters.
Halvorson said the map would keep population numbers equal among districts, and moves as few people – while preserving precinct and district boundaries – as possible.
“The League acknowledges this has not been an easy process. We thank you for your service to the citizens of Clark County,” she added.
Joe Bruening, another resident commenting during the hearing, thanked Kimsey for chairing the committee.
“Even though you may be a member of a different political party than me, I appreciate your fair and equitable treatment of this matter and all other matters election related,” Bruening said.
He also said Kimsey exemplified the kind of nonpartisan service Clark County residents expect from public officials.
Tim Gaughan, of Battle Ground, reminded the committee that second chances don’t come around very often and encouraged them not to waste this chance.
“Map B2 was formulated by the entire committee, your input and the skill of the redistricting master and complies with all the requirements of RCW 29A.76.010,” he said before urging the committee to approve the map.
The redistricting committee next meets at 6 p.m. on Feb. 16. For an agenda or link to join the virtual meeting, go to https://clark.wa.gov/calendar.
— Shari Phiel