Madore’s park job is meme of the day 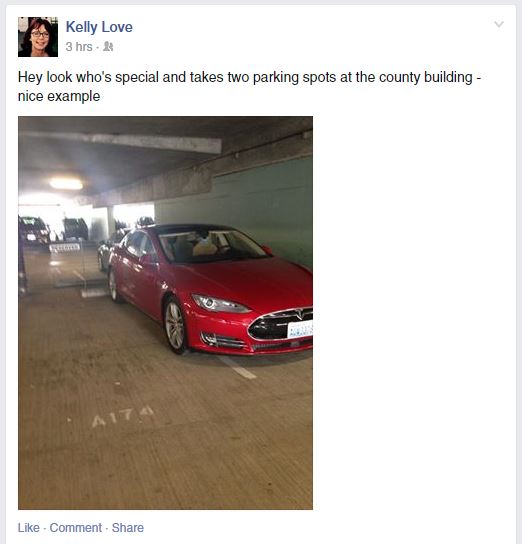 Inquiring minds want to know what is going on with Councilor David Madore’s Tesla in the county parking lot.

Specifically, why is it double parked? Kelly Love, president of the Greater Vancouver Chamber of Commerce, posted a photo today of Madore’s bright red Tesla taking up two parking spaces in the county garage. She’s since deleted the photo, which was briefly her cover photo, but here at The Columbian, we tend to take a lot of screenshots. It was kind of the meme of the day. Soon my texts and Facebook messages were blowing up with the photo, so I asked county Purchasing Manager Mike Westerman if Madore was paying for two spots for his own car. Look, if I owned a Tesla and could buy two spots for it, I would. Who wants someone scratching that thing?

Turns out he’s not, though. He’s paying monthly for a spot for himself and one for his personal assistant, Anna Miller, but not a second spot for the Tesla. Westerman said enforcement likely hasn’t caught up with him, but he will receive a warning if he’s parked improperly.

And, for the inevitable questions I know will come, here are the answers.

“Isn’t there more important news you could be writing about?”
Yeah, probably.

“Why are you always picking on Madore?”
This is actually one I didn’t want to write about, but at least five people have pointed it out to me, so I figured I’d take 20 minutes to answer the question.

“Why aren’t you writing about all the stuff the City of Vancouver and C-Tran are doing?”
Because I’m not the Vancouver City Council or the transportation reporter. Try Amy M.E. Fischer for city issues and Eric Florip for transportation issues. I can’t really help you on editorials either so don’t ask me about those.