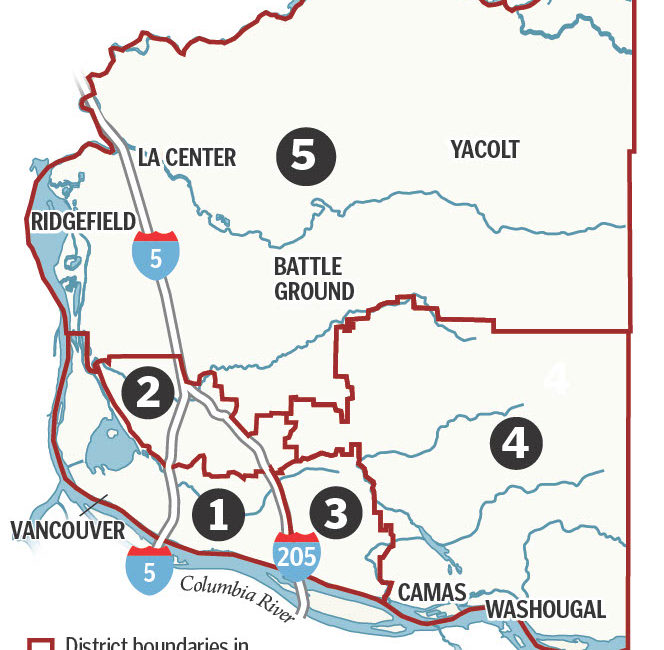 On Wednesday, the Clark County Council approved a long-awaited voting district map. But before the day was over, their decision to adopt the map titled C2 was already headed to court.

In her suit, Landesberg says the county violated state law several times during the redistricting process. Landesberg said the first violation occurred  when the council failed to adopt a map by Dec. 31, 2021. She said the council also violated state law during its March 30 meeting when Councilor Gary Medvigy asked Councilor Julie Olson “whether she wanted to run for re-election in Council District 2 or Council District 5.”

The suit cites Medvigy’s direction to Geographic Information Services staffer (and former redistricting master) Paul Newman to “start by drawing a map placing the four elected councilors in the districts which they currently represent. Such a map favored Councilor Karen Bowerman by moving her out of the same district as her Republican colleague Councilor Gary Medvigy. This action shows bias in favor of a particular party (Republican).”

She also said the council violated state law when it approved map C2, which left a majority of the councilors in their existing districts. Landesberg wrote this decision favored the Republican party, a violation of state law which requires no favor or disfavor of a political party.

In her suit, Landesberg notes that over 70 percent of Clark County voters approved the five-district map included in the voters’ guide for the November general election. The redistricting committee was tasked with apportioning the new census data as equally as possible among the five districts. But when the redistricting committee could not get the four votes needed to pass any map, the decision was left to the county council.

“Notwithstanding multiple meetings and votes, the two Republican members of the committee refused to approve any plan that did not move County Council Karen Bowerman back into the Council District 3,” Landesberg wrote.

The case has not yet been scheduled for a hearing.

The council’s vote to approve Map C2 also means some extra work for the Elections Office. Auditor Greg Kimsey said the changes resulting from the adoption of C2 were incorporated into the election management/voter registration system by Wednesday night.

For the 55,942 registered voters affected by the map changes, Kimsey said voter registration cards will be mailed to them starting early the week of May 16.