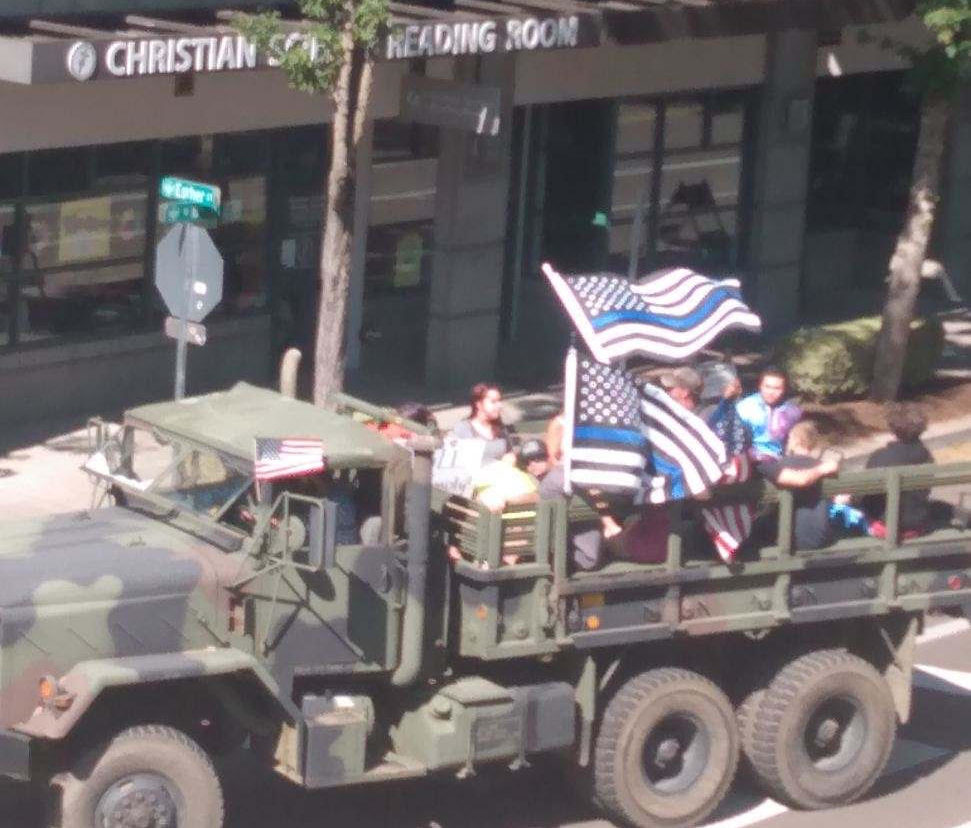 A leader with the League of United Latin American Citizens said Friday that the organization will “make every effort to join in the recall of Councilor Eileen Quiring” after the chair of the Clark County Council said Wednesday that she does not believe that systemic racism exists in the county.

“I had to hear it for myself and when I did, my jaw dropped,” said Diana Perez, LULAC Washington state director. “We can no longer afford to have that type of mentality in public office if we are to make change. Councilor Eileen Quiring has shown extreme ignorance and disregard for Black and brown people living in Clark County. Through her expressive racist statement, Quiring is choosing what side of history to stand on.”

The council’s letter to the local NAACP said that the displays are not appropriate for public property. Councilors mentioned Wednesday that the county Fleet Department, not the Sheriff’s Office, purchases the patrol vehicles.

The letter also said the symbols act as barriers to productive discussions around eradicating racism.

“The county council is committed to taking meaningful action to eliminate hate, bigotry, and racism in our county,” the letter reads. “As a county government, we must lead by example.”

“I think it’s horrible when people are discriminated against, and I feel empathy for those people, too,” Quiring said. “That does not mean that we have to set aside the people who defend the laws that we write, that we place. I do not agree with this letter. I will not sign it, because I do not agree that we have systemic racism in our county. Period.”

Sindy Benavidez, the organization’s national CEO, also released a statement about Quiring’s comments on Friday. She listed several examples of systemic racism, including lack of proportionate representation in corporate and government boards.

“In some ways, exclusion and discrimination has become more sophisticated than outright lynchings and signs saying ‘No Mexicans Allowed,’ but make no mistake about it, systemic racism raises it ugly head every day,” Benavidez said. “For too long, Latinos have been intentionally excluded through laws that criminalize us and prevent our children from reaching their highest potential.

Systemic racism is alive and it is up to all of us to acknowledge it and call it by its name.”

Examples included the fact that minority communities are disproportionately affected by COVID-19 due to disparities in healthcare, food and housing. He also referenced the Southern Poverty Law Center, which lists 11 hate groups in Clark County.

“She is disconnected from her community. To my eyes, she’s reflective of the old guard of Clark County that was a very conservative group of people,” Hamilton Rosales said. “By saying what she said, she’s basically just showing her white privilege in not recognizing the systemic injustice in policies that she helped to create.”

“I was really embarrassed for Clark County. It seems like the nation and the world are moving forward with the idea of Black Lives Matter, and we’re not moving forward,” Fahnbulleh said.

“It’s like saying, ‘I don’t believe apples exist.’ I don’t know what to do with that.”

Fahnbulleh encouraged Quiring and those who agree with her to research issues of systemic racism.

“Turn off Fox News, go down to your local library and ask the librarian for a book about systemic racism,” Fahnbulleh said.

Karen Morrison, a Black woman who lives near Esther Short Park, said she was disturbed Friday when a group of people carrying “Blue Lives Matter” flags marched near her home. She said some

of the marchers carried guns and played a Dixie air horn.

“I just have a feeling that if it were a black man with a gun strapped over his shoulder he wouldn’t be allowed to do that,” Morrison said. “I’m angry.”

Below is a partial transcript of the conversation, edited for clarity and brevity. The council time meeting is also available on the county website, where the discussion about the letter begins around 25:25.