My name is Chance 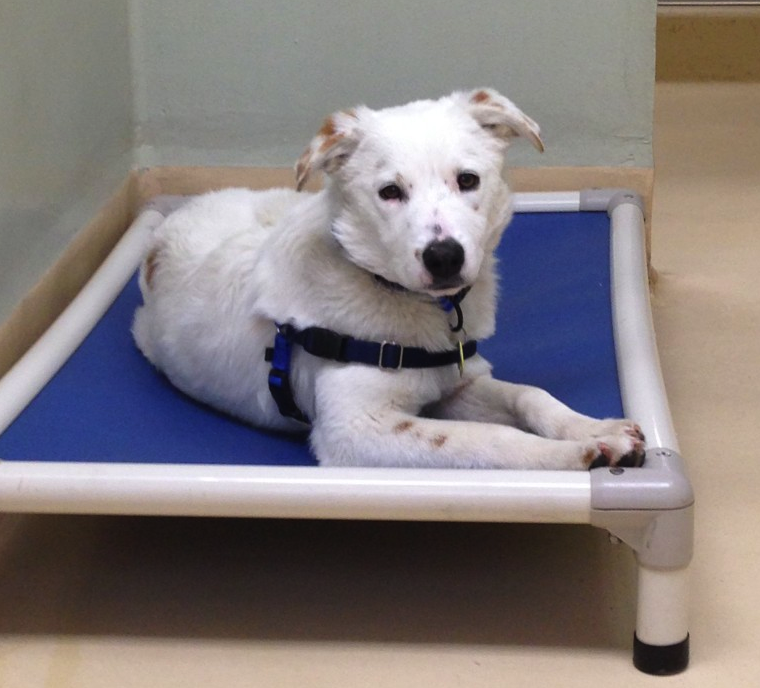 Chance AKA “The White Tornado”

Hello, My name is Chance (aka “The White Tornado”) and this is the story of my new home. My story begins in the country where I was born on a farm with lots of dogs and other animals. I was one of the  smaller dogs, which made life harder when it came to trying to get food or even attention. I was part Blue Heeler and part Australian Shephard, and I weighed about 28 pounds. I was a little skinny because I was always the last to get to the food. I was mostly white with a few brown spot and freckles, and I had brown eyes. The bigger dogs were always nipping at me because they thought that I bugged them too much, but I only wanted to play. I was only a puppy and I got bored just sitting around herding things. There were a lot of things to do on the farm but it seemed I was always getting into trouble for chasing chickens or horses. One day I chased a skunk and then cornered it by some bushes. The skunk sprayed me all over my neck and it really stunk.  I ran away and tried to roll off  the smell of the skunk, l off but it didn’t work.

One day a few weeks before Christmas my human family decided that they had too many dogs and needed to give some away. I was always getting into mischief and smelled like a skunk, so I was an easy target.  I was tired of getting picked on every day, but it was the only life I knew.

The humans brought me to a shelter where there were a lot of other dogs.  I liked to play with other dogs, but they never really let the dogs play together at the shelter.  I immediately got very lonely and missed the farm.  People came by and petted me and tried to  walk me, but it was not the same as being on the farm.  After a few days I was neutered and given a bath, but the skunk smell did not come out.  The next day I rolled all over the floor and my white fir got filthy but I was trying to get rid of that skunky smell so that someone would take me home.

To make matters worse, they named me Handsome Harry at the shelter.  I don’t know who came up with that brilliant  name!    I was a handsome dog with beautiful gold eyes, but the name was not very macho.

After a few days, a  middle-aged couple came in .   The couple came over to my cage and looked me over.    The man said he thought I had beautiful eyes but they were sad.  I went over to the human man, sniffed his hand and give him my best dog smile.  The next thing I knew, the man and woman were taking me in one of those rooms where you meet people.  They tried to get me to play with a ball, but I was not very interested because I saw these dog treats in the window sill that I really wanted.  I got up on my hind legs so I could snag the treats.  The couple thought this was very funny, and I think that is when they decided I was the right dog for them.

The couple left, but they came back about an hour later with their son.    I was in the meet and greet room with another family, but they just were not my style.  The man at the shelter also told the family that someone already had a 24 hour “hold” on me,  whatever that meant.  I went back in the meet and greet room with the couple and their son and tried to be as charming as I could.  My tactics must have worked because the next thing I knew, I was getting into a mini van with the couple and their son.  I was on the way to my new home!  The woman held me close in the car, even though I smelled like a skunk.  I was a little scared, but something told me I was going to a good home where I would be loved.   I heard my new mom say to dad “I sure hope this smell comes out!”

Dad did not seem worried about the smell, but was more concerned with getting rid of my name.  He told mom “There was no way, we were keeping that name!”  Dad decided my new name would be Chance because I came from the second chance program at the Humane Society.  I had to admit I liked that name better than Handsome Harry-who names their dog Harry?