MLS POSSESSION WITH PURPOSE POWER RANKINGS – AS OF 19 AUGUST 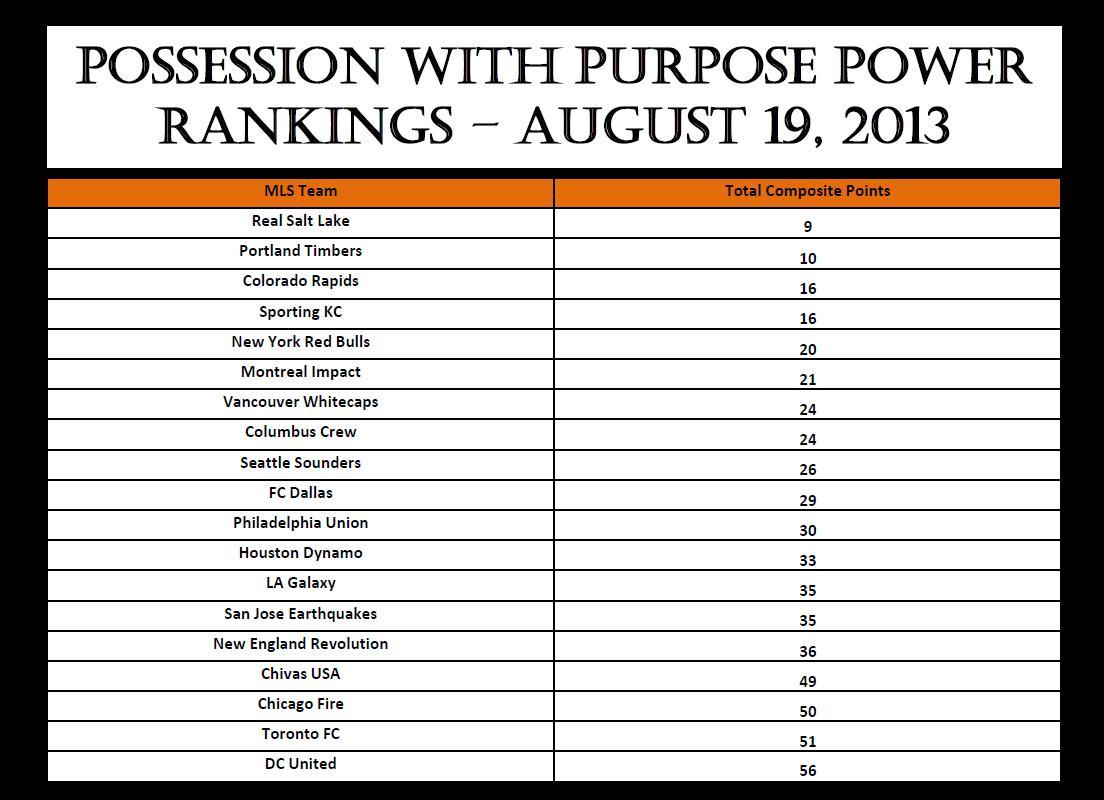 Two objectives in this initial article; first is to briefly set the conditions for my regular weekly MLS Possession with Purpose Power Rankings and second, the rankings and corresponding analysis to go with them.

Setting the conditions…  there are three categories used to create the Composite points total that stems from empirical data that provides:

Category 2: Possession with Purpose Defending Efficiency Index; an Index for team defending performance in the final third, and

Category 3: Current points in the MLS League Table for each team from first to worst.

Definitions behind the categories are provided here… recommend this link be read to understand the train of thought in combining these three categories into one overall ranking assessment tool.

Definitions on how the Attacking Efficiency and Defending Efficiency Indices are developed and provided here…  recommend this link be read to understand the empirical data behind the Indices.

Here’s the complete table with the final Composite scores for all 19 teams in MLS: POSSESSION WITH PURPOSE POWER RANKINGS AS OF 19 AUGUST 2013

The primary source for data in this analysis has been OPTA and the OPTA Chalkboard; every game has been analyzed so far this year and only two games have been excluded due to missing OPTA Chalkboard data.  Those games were Vancouver vs New England on June 15 and the game between Chicago Fire and Sporting KC on July 7th.

I am hopeful of comments and thoughts from others on this effort.  Bottom line for me is I think and feel there is value in assessing and analyzing final third activities across the board.  If value presents itself here then perhaps there is value in other leagues as well as perhaps the World Cup next year.

I for one have always looked to ‘get the panacea’ of empirical data that had value but didn’t get into the “eaches” of individual players – I see this game as a team game and for me this ‘team analysis’ scratches that itch; others may have a different view or say that a whole lot better than me…

My thanks to James Dennis, Simon Banoub, and Simon Farrant for their patience in helping me to better understand some of the nuances in leveraging OPTA Chalkboard data.  This data is readily available for anyone who follows MLS and is familiar with how to use the OPTA Chalkboard.

My thanks to Ben Puglsey and others at @statsbomb for helping me to better understand some nuances in data collection and where other types of data are readily available for all to use in their analysis and a shout out to Harrison Crow for our chats about ‘possession and passing’ and Matthew Hoffman for giving me a basic foundation for a new Defending Efficiency Index while helping me to improve my possession with purpose analysis.

My thanks to others in the past 24 hours for additional feedback – theaxepdx, kip, shawn.

Next up my Match Preview between the top two teams in MLS, to date, this year; can’t wait for the kickoff Wednesday night at 8:00 PM on ROOT Sports TV and MLS Live.