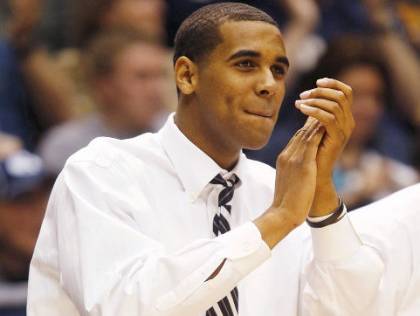 The Cinderella slipper fit for the Florida Gulf Coast and G Sherwood Brown has enjoyed the fairy tale ever since.

A couple good weeks in March could be your introduction to really important people.

Or, that a tournament held in East of Nowhere, Virginia could land you a million-dollar job.

These scenarios make perfect sense for NBA Draft prospects like Sherwood Brown of Florida Gulf Coast and Brandon Davies of Brigham Young Univ. Both players have garnered their share of pre-draft workout invitations thanks to a strong run during March Madness (Brown) and a solid performance in the Portsmouth Invitational Tournament (Davies). And both players spent Monday morning inside the Trail Blazers’ practice facility as the invited guests during the team’s third workout.

“To be honest, if we didn’t have the run like we did in the tournament, you probably wouldn’t see me right now,” Brown said on Monday. “So I feel like our tournament run definitely helped me a lot.”

Before March 22, who outside of the Fort Myers, Fla. had heard of the name Sherwood Brown? That all changed inside the Wells Fargo Center when the No. 15 Florida Gulf Coast Eagles alley oop’ed their way into the hearts of college basketball fans with their upset over the third-seeded Georgetown Hoyas. Brown, the senior guard, was the leader of the loose bunch and scored a game-high 24 points that night. The next game, Brown soared with 17 points and eight rebounds as “Dunk City” downed San Diego State for another win. By the time FGCU had ended its seven-day run as the darlings of the NCAA Tournament, nobody could wonder: “Sherwood Brown who?”

There were notable upticks for Louisville’s Gorgui Dieng and Michigan’s Trey Burke after their individual and team performances during the 2013 NCAA tournament. But Brown’s ascension from unknown to potential Draft pick was particularly stunning.

“I’m sure they expect me to go out there and play hard, which is definitely something that I was definitely doing when I was in the tournament,” Brown said of NBA scouts. “It doesn’t really surprise me because I kind of figured that, if we did really good in the tournament that I probably will get a couple looks at some teams. I’m just coming out here, just playing hard and hopefully I can showcase a little more things that I didn’t get to showcase in the tournament.” Although Brandon Davies had to sit near the end of his promising sophomore season, the buzz picked up two years later during his play in an all-senior tournament.

Then, there is the interesting case of Brandon Davies, the 6-foot-9, 235-pound forward. Jimmer Fredette owned BYU in 2011, but the Cougars also depended on the big sophomore with the passing and scoring touch. All that ended when Davies was suspended from the team for violating the school’s “honor code.” A salacious story only because the word “sex” was tossed around, Davies’ dismissal hurt BYU’s chances as a tournament Cinderella. Davies returned to BYU for his junior and senior seasons – a fact not as highly publicized as his dismissal – and finished his career with lukewarm statistical averages of 12.4 ppg, 6.2 rpg, 1.6 apg.

“I just wanted to be there with my teammates,” Davies told me about his decision to return to BYU. “I wanted to do everything I could to get back and handle things the right way. I think I’m a stronger person today because of it.”

“Every year (I) focused on getting better and doing things to make my team better. I think I definitely matured.”

Despite Davies’ admirable loyalty, he closed out his college days with little fanfare as BYU flopped in the second-round to Marquette in 2012 and failed to make the tournament during his senior season.

However this past April, Davies re-invented himself at the Portsmouth Invitational Tournament as a legitimate NBA prospect. In the ‘PIT,’ a four-day, 12-game tournament that features 64 top college seniors, Davies earned MVP honors as his team swept the bracket. Davies’ team also featured Kansas guard Elijah Johnson, coincidentally another participant in the Trail Blazers’ Monday workout. During the championship game with several NBA scouts on hand, Davies scored 23 points (10-14) in 28 minutes and also pulled down eight rebounds.

“I think that’s what definitely has put me on the map,” Davies said. “I was just grateful for the opportunity to go in there and play. I was able to get on a good team with a lot of great guys and we ended up winning the thing. That just kinda put my game on the map and gave people an opportunity to see what I can do.”

So, in honor of Brown and Davies, I dedicate this Oleta Adams jam to them. OK. I know what you’re thinking: “Candace! What a cheap way to work in your obsession for 90s R&B songs into your blog!” And to that I say, you’re absolutely correct. But Adams preached the truth when she sang, I don’t care how you get here, just get here if you can!

Whether by a crazy seven-day stretch in March or by a MVP-winning weekend in Virginia, these players really don’t care how they get into the NBA… just as long as they can get there.