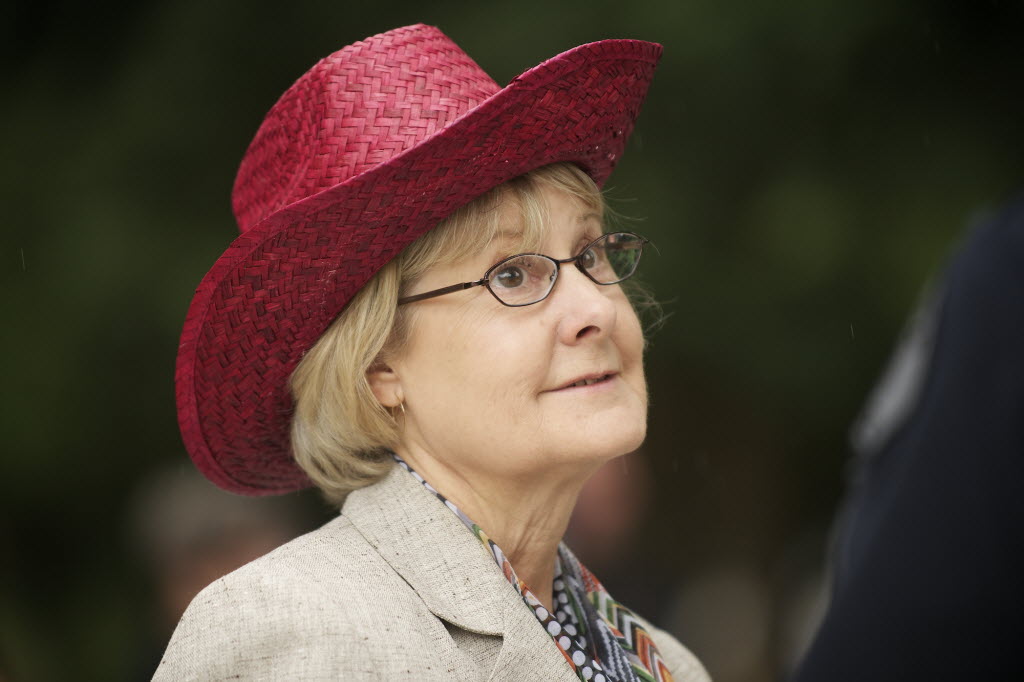 This continues to be the best photo of Councilor Jeanne Stewart that exists.

It was a big week for Clark County Councilor Jeanne Stewart.

On both Tuesday and Wednesday, Stewart showed she’s not afraid to stand up to fellow Councilors David Madore and Tom Mielke. Stewart’s tough words earned her a great deal of applause from the crowd at Tuesday’s hearing, and on Wednesday, someone in my Twitter feed actually referred to her as “QUEEN,” because apparently Stewart is Beyoncé now.

Let’s review the play-by-play. On Tuesday, Madore presented brand new material to be considered for Clark County’s Comprehensive Growth Management Plan update, at least some of which could trigger a complete redo of the growth plan. That’s serious business given the pending June 30 deadline, and until about an hour before the hearing, no member of county staff or the public even knew Madore’s ideas were coming.

This shouldn’t be surprising at this point. Madore’s proposed Alternative 4, his own alternative to the growth plan, came way out of left field earlier this year, too. It’s highly unusual for one councilor to develop their own component of a growth plan. That’s a job usually left to, well, planners.

Following a five-hour meeting, the council, in a move that should surprise no one, voted two to one to put off the selection of its preferred alternative, and to discuss Madore’s latest ideas, to Nov. 24. Stewart cast the dissenting vote, but not before turning to Madore and laying down the law.

“I want to say that it is absolutely shameful the way that you have hijacked this process to get people to comply with your, and only your, will,” Stewart said to Madore. “This is not good government. It’s shocking and I’m ashamed of it.”

Let’s go to the tape.

Stewart kept her intensity up during Wednesday’s board time. About an hour into what somehow managed to be a two-hour meeting that had hardly any agenda to speak of, Stewart, again, turned to Madore with some serious words.

“I sometimes get the feeling that the culture of this board is that staff is incompetent and that they need to be second guessed on just about everything,” Stewart said. “And I don’t think that’s a healthy culture for us to bring to the table, that we can do everything better than the staff, and that we’re smarter than the staff, and that we don’t even really need the staff. Sometimes I get the impression that we underestimate the value of what we have in the staff.”

Madore, however, didn’t take this sitting down.

“I need to say something here,” he said. “That is so inappropriate. I don’t know who you’re talking about.”

“I’m talking about you and Tom,” Stewart shot back.

“Okay, that’s who I thought you were talking about—“ Madore started.

“And let me be clear—“ Stewart said.

“—And that is inappropriate,” Madore continued. “If you can identify anything that I have said or Tom has said that has in any way filled the specifics of what you just said, by all means we need to hear it. Such general criticism that attack the characters and the motives we have is completely inappropriate, so if—”

This conversation went on for some time. You can listen to the whole exchange here.

These outbursts from Stewart have been a long time coming. She’s been increasingly snippety at her fellow councilors for some time. But this week, in my opinion, represented a turning point for her. If there was any hope of a buddy-buddy relationship between Stewart and the boys, it appears to be gone at this point.

And I, for one, am looking forward to seeing what’s next from her.